Thousands of Polish miners descend on Kirchberg in EU protest

Thousands of Polish miners descended on Luxembourg on Friday for a protest march, which passed off peacefully amid a huge police presence, against a ruling by the EU's highest court ordering the closure of a mine in their country.

Members and supporters of trade union Solidarność, which called the protest, arrived in the Grand Duchy in coach loads from Poland, wearing hi-visibility jackets with the slogan "hands off Turów", beeping horns, and waving flags and placards.

Their protest march led to disruption in the Kirchberg area until early afternoon, with roads shut and businesses deciding to close as a result of the protest.

The Kirchberg-based ECJ ruled last month that Poland must pay €500,000 a day to the European Commission for refusing to temporarily cease work at the Turów mine near the border with the Czech Republic, which has complained about the damage the mine does to the environment.

The march began at around 9.30am, with miners starting their protest at the court, walking through the Kirchberg financial district, and then moving on to the Czech embassy, which is located just after the Grand Duchesse Charlotte bridge which leads from Kirchberg to Luxembourg City centre.

“We want to give a message to the international community, that it is unfair for the miners and our main objective is to prevent the closure of the mine,” Jaroslaw Grzesik, one of the main organisers of the demonstration, told the Luxembourg Times through a translator. “It is not true to accuse the mine of having a negative environmental impact. Our mine does not have such an impact.”

Poland’s trade union Solidarność is known for its role in overthrowing the country's communist government. Luxembourg had prepared for tensions to rise at the protest with around 840 police officers involved, including officers from units such as the special police, airport police and judicial police.

They were equipped with military vehicles, dogs and air support and set up barbed wire barricades while Belgian police provided water cannons and two vehicles similar to military armoured personnel carriers. Officers also set up barbed wire barricades through the Kirchberg area around the ECJ, where the protest began, and in front of the Czech Embassy.

“As a result of the completely callous, one-man decision of the EU Court of Justice to close the Turów mine we are facing the loss of hundreds of thousands of jobs, the paralysis of an entire region, and the pushing of ourselves and our families into energy poverty and destitution,” read a leaflet handed out by protestors. 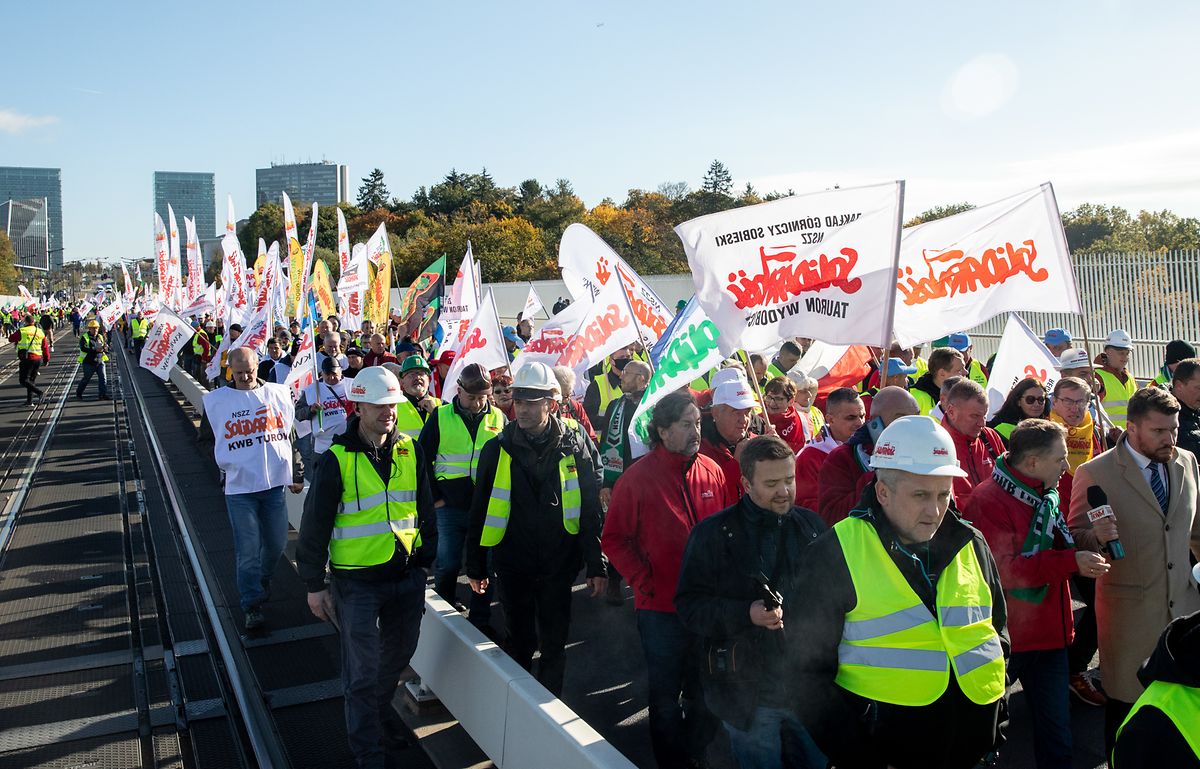 In a press statement on Friday, an ECJ spokesman said that the Turów case is still ongoing, and that the order regarding the suspension of the mine’s activities is an interim measure.

On Thursday, Poland lodged a formal application with the ECJ requesting that the order be revoked, a request that the EU’s highest court said is “under consideration”.

Friday’s protest “took place without any major incidents”, an ECJ spokesman said. “Special measures to secure the perimeter of the Court's buildings were taken by the Luxembourg authorities in view of the expected number of demonstrators,” he added. “The continuity of the institution's activity was fully assured.”

The planned demonstration came amid the backdrop of a wider row between Poland and the European Union over issues such as the rule of law and LGBTQ rights, with the bloc threatening to withhold funding due to the country in response.

Poland’s nationalist government last week cemented into law a ruling that challenges the EU legal order by saying Polish law can override it. That move came on the same day that a case was being heard in the ECJ in which Poland is appealing a mechanism established in January that allows the EU to withhold budget distributions to member states.

In order to make a maximum number of officers available in the event of unrest, several police stations in the city were closed on Friday morning. Roads around the court were blocked, including Boulevard John F. Kennedy, Boulevard Konrad Adenauer and nearby streets, Bech Bridge, and the Schuman roundabout. Staff at some nearby offices, including the European Investment Bank, were advised to work from home.

Earlier this year, the Czech Republic filed a lawsuit against Poland saying the Turów mine, close to the Czech border, drains groundwater from surrounding areas, expressing concerns about its environmental impact. The ECJ ordered Poland to stop its extraction activities at the mine but the country's government ignored the order. The Czech Republic asked the ECJ to impose a daily penalty of €5 million but last month the court said Poland must pay €500,000 a day for as long as the mine continues to extract.

A group of pro-EU Polish supporters living in Luxembourg organised a counter protest against the main demonstration by the trade union members, with 20 to 30 people in attendance.

“We want to show that all Polish people aren’t against the EU,” Izabela Milewska told the Luxembourg Times. “The Polish government should have resolved this with the Czech Republic.”

ECJ
EU gets boost in bid to rein in renegades Poland, Hungary
The ruling came at the Luxembourg-based European Court of Justice on Thursday

European Union
Gloves come off in EU clash with rogue members
Poland’s government cemented into law a ruling that challenges the EU legal order, as a case was unfolding before the bloc's highest court

Rule of law
Poland rejects primacy of EU law, deepening feud with bloc
Warsaw-based tribunal ruled that “the Republic of Poland can’t function as a sovereign and democratic state” if it allows EU to influence spheres where it has not deferred powers